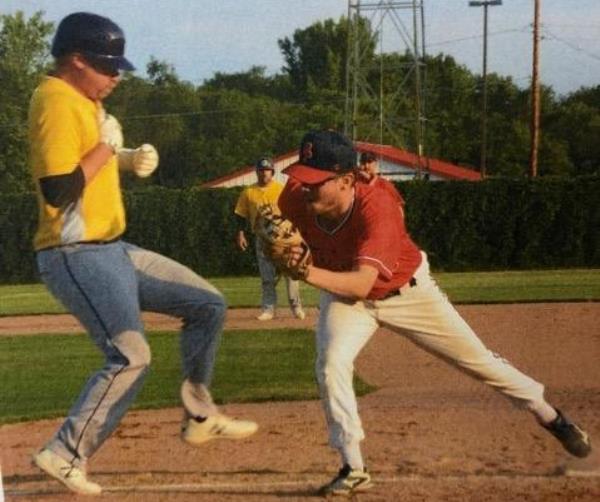 It took until the last day of June, but the Tigers finally picked up their first RVL win of the season last week by outlasting Gaylord in a slugfest/slopfest, 15-9. Belle Plaine is still looking upwards in the standings but as winners of three of its last five games, it will try to carry that momentum into July.

After taking off the Independence Day holiday extend-a-weekend, play resumes tonight when Veseli of the Dakota-Scott-Rice League pay a visit at 7:30 pm. The Tigers haven’t hosted the Warriors since 2010.

The Tigertown Express will then hit the road this weekend for a pair of RVL contests: Friday at St. Peter (7:30 pm) and Sunday at Arlington (6 pm). Get game updates at twitter.com/bptigertown and facebook.com/bptigertown, as well as the home base, bptigertown.com.

Jack Kruger took the mound against Gaylord, but the guests got off to a fast start with five of the first six men reaching base. With help from some sloppy Tiger defense, the Islanders had a three-run lead before the Tigers knew what hit them. The T-Train responded quickly, however, with a two-run single from Jake Brandenburg in the first inning followed by a two-run single from Brody Curtiss in the second.

Kruger settled down thereafter, and he didn’t let an Islander reach second base over his next four frames. The Tigers batted around in the fifth, scoring six runs – including a bases loaded, bases-clearing double by Curtiss.

Gaylord stayed in the game with a big inning of their own, plating seven runs on just two hits. As you might have guessed, the rally was spurred by four walks, three wild pitches and a pair of errors. The Tigers added four insurance runs in the eighth inning, however, to help salt things away.