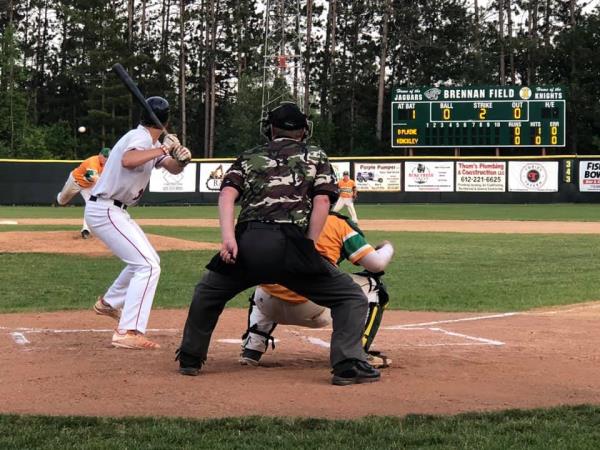 Tigers Drop Pair of Close Ones at Hinckley
Posted on Jul 08, 2021

The town-team Tigers headed for Hinckley last weekend and the Hinckley Invitational Tournament – the team’s third straight weekend playing in a playoff. Unlike the first two tourneys, the Tigers came up empty, going 0-2 in a pair of competitive contests.

Friday was “Tommy Miller Night,” as the former Tiger was inducted into the Hinckley Hall of Fame. Miller’s favorite town teams waged battle, with Hinckley holding on for a 2-1 win – Belle Plaine’s third one-run loss of the season. After a day off to round up the troops, El Tigre fell 4-2 on Sunday to Spring Hill, losing in the final frame.

The local nine will take their 4-13, 0-5 (RVL) record into tonight’s “Return to the RVL” contest, when the Gaylord Islanders visit Tiger Park at 7:30 pm. Gaylord won the first matchup this season, 4-2, on May 23. Tonight’s promotion is Belle Plaine Community Education / Little League Night. All Little Leaguers are invited to wear their uniforms to the game, chase foul balls, and get a free hot dog at the concession stand!

The Tigers will be off during the Independence Day holiday weekend, returning to play when they host Veseli on Wednesday, July 7.

Hinckley’s first two batters of the game crossed the plate, putting a smattering of Tiger fans on edge and pitcher Josh Terrio on the ropes early. The 15-year veteran settled in quickly after that, however, and was nails for the rest of the game. In going the distance, Terrio didn’t allow a baserunner past second base once the first inning was complete.

The Tiger bats were quiet for the first half of the game, finally pushing a run across in the fifth. After stranding runners in the sixth inning, BP started the seventh with two runners on and nobody out. After a strikeout during a sacrifice-bunt attempt, a wild pitch got the job done and put runners at second and third with one out, trailing by a run.

That’s when Knights pitcher Cory Schmidt decided to put his foot down, registering two more strikeouts to set down the side and preserve the 2-1 victory. Both teams finished with five hits.

The Tigers faced off on Sunday morning against the Spring Hill Chargers, members of the Stearns Country League. Rookie Dylan O’Brien got the ball from manager Matt Ruehling and showed well, working into the 7th.

Tied 2-2 into the 7th, O’Brien left a few men on base before giving way to fellow right-hander Colton Kerkow. The Chargers burst the Tigers bubble when they delivered a two-out, two-run single for the final margin of victory. The Tigers went 1-2-3 in the home half of the 7th.

Brody Curtiss led the way offensively with a pair of hits. Jack Kruger contributed an RBI double, while Jon Schmidt had an RBI single.