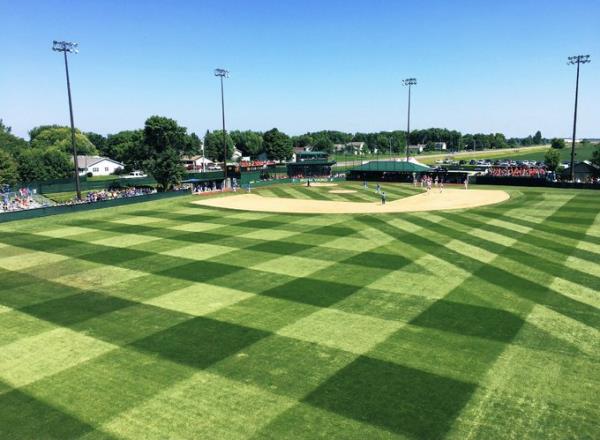 Your local ballfield warriors, the Belle Plaine Tigers, ventured to Green Isle and Hamburg for the Miller Lite Invite Tournament. The hometowners started the weekend by hanging around before getting dismissed by a very good Isanti team. The Tigers roared back by winning their next two games, though, outscoring their foes (Chokio and Hamburg), 25-5, over 11 innings of play.

With a win, the Tiger Train will play next on Saturday at 8 pm, against the winner of Spring Hill and Maple Plain. With a loss, they will face the loser of that contest at 10:30 am Sunday. With a win in either of their first two affairs, the Tigers will play a third game, at 1 pm, 3:30 pm or 6 pm on Sunday. Follow twitter.com/bptigertown for developments.

Looking ahead, the Tigers will return to RVL action a week from today (Wednesday, June 30) when they host Gaylord at 7:30 pm on Belle Plaine Community Education / Little League Night.

The Tigers started slowly in the Miller Light Invitational Tournament, with both of Saturday’s games played at Irish Yard in Green Isle.

The Isanti Redbirds jumped on the Tigers in the second inning, capitalizing on two errors to score five runs. Colton Kerkow battled on the mound and kept Belle Plaine in the game. Isanti scored a run in the 5th to stretch it to a six-run cushion.

The Tigers had five straight batters reach in the sixth to plate three runs. That was the offensive highlights for the Tigers, however. Kerkow, Carsen Ladd, Brody Curtiss, Garrett Boblitt and Zac Dahlke all had one hit apiece. Kerkow went the distance on the hill, notching a pair of strikeouts.

Belle Plaine jumped out to an early lead in the second game of the day against Chokio. An RBI groundout from Jon Schmidt in the first inning had the Tigers rolling.

Through four innings, the Tigers were down by a pair of runs to Chokio. That changed in a major way in the fifth, as Los Tigros batted 18 men and scored 13 runs! Tiger hitters drew nine walks, and Tyler O’Brien had two hits and three RBI in the fifth frame alone.

O’Brien finished with three hits. Schmidt had two hits of his own, while Curtiss scored three runs. Boblitt took the mound and was effective, scattering five singles and compiling three strikeouts in five innings.

Jack Kruger drew Sunday’s mound assignment for the first time since his marvelous performance in the high school state tournament – and the young right-hander didn’t skip a beat. Facing only two batters over the minimum in six innings of work, he let just one Hawk reach scoring position.

The offense kept rolling for BP by scoring in the first, third, fourth, and sixth innings. O’Brien and Ladd had three hits each, while Schmidt, Jake Brandenburg and Josh Terrio collected two knocks apiece.

Offensive leaders for the weekend were O’Brien with six hits, three RBI and three runs scored. Ladd had five hits and five runs scored, whereas Schmidt had four hits and four RBI. Kruger had three hits, with two of them for extra bases.