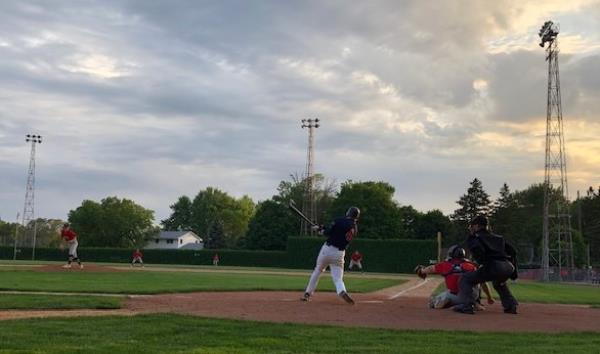 By Brett Kruschke and Jack Gill

After a 7-0 loss to Le Sueur last Wednesday, the Tigers fell to 1-6 on the season (0-3 River Valley League). Things won’t get any easier when the Jordan Brewers – the long-time class of the RVL ‘C’ teams – pull into Tiger Park on Friday for a 7:30 pm tilt.

Friday’s promotion is Matt Saxe Chevrolet Night. Perhaps they will provide the bullpen car of which we’ve long dreamed!

On Sunday, Team Tigertown will meet up again with their fellow French-named counterparts when they trek to Le Sueur for a 2 pm affair on Sunday.

Tigers southpaw Zac Dahlke found himself in trouble right out of the gate, as the Braves got a runner to third base on a walk, a steal and an overthrow. Tommy Gupton brought him in with an infield single. Mitch Casperson responded with a single of his own, bringing the runner to third.

Clean-up hitter – and opposing pitcher – Tristen O’Brien followed with a sacrifice fly to make it 2-0. Dahlke allowed another walk before the Braves pulled off a double steal. With both runners in scoring position, Logan Kahlow belted a double to extend Le Sueur’s lead to four runs.

Meanwhile, Dahlke gave up a bases-loaded walk in the second inning to make it 5-0. But after those first two costly innings, the portsider got in a groove and retired seven straight batters. The Braves got a runner on in the fifth from an error, but the next batter hit into a double play. Dahlke finished his five-inning outing allowing five runs, four hits and three walks, with four strikeouts.

In the later innings, the Tigers continued to be stuck with zero runs, this time continued by Burke Nesbit. Nesbit threw five scoreless frames, allowing just one hit and one walk with eight strikeouts. Belle Plaine’s only hit-off Nesbit was a Carsen Ladd single.

Josh Terrio pitched the fifth and most of the sixth inning for the Tigers. After a few more errors, the Braves tacked on two more runs. After Terrio left the game with an injury, Garrett Boblitt cruised through the Braves lineup the rest of the way going 2.1 innings, allowing no hits and three walks with four strikeouts.