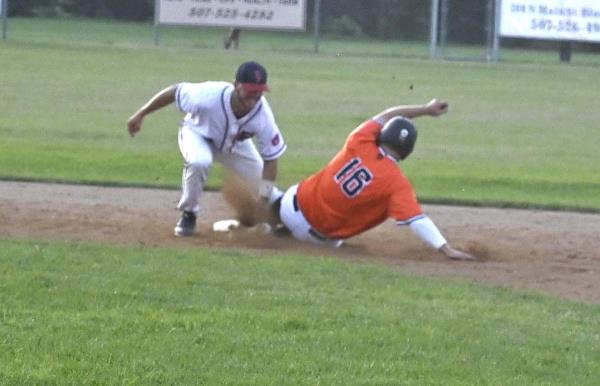 By Brett Kruschke and Matt Schultz

Belle Plaine led by one run with one (extra) inning to go in the Region 6C Tournament on Saturday, Aug. 15, but couldn’t close the deal, instead getting walked-off by Waterville in a season-ending 5-4 loss. The Tigers had rallied from two runs down in the seventh inning to tie the score before taking their first lead of the game in the top of the tenth.

If you turn back the clock to the sixth inning at Jordan six days earlier when Belle Plaine held a 5-3 lead, it was a pretty rough rest of the week for our beloved boys of summer. But the great game of baseball makes no promises to those who cross its lines.

Two Tigers will take part in the upcoming state tournament: Brody Curtiss was drafted by Gaylord while Jordan selected Derek Dahlke. The Islanders will play on Sunday, Aug. 23 at 5 p.m. in Milroy against St. Martin, while Jordan doesn’t play until taking on the winner of Midway and Lake Henry on Sunday, Aug. 30 at 5 p.m. in Milroy. Springfield is the other host site for this year’s Class C State Tournament. Shakopee, meanwhile, will host the Class B Tournament.

The 2020 “Covid campaign” ends with a 10-7 record (7-5 River Valley League) – Belle Plaine’s third winning season in a row. Visit bptigertown.com and click on Stats to view the season-ending statistics.

The team thanks the Tiger faithful for the tremendous support they received in this bizarre season and hopes for a full season in 2021.

The Tigers made the long trip on Saturday, Aug. 15, down Highway 169 to Blue Earth, squaring off against Waterville in a win-and-advance or a lose-and-get-ready-for-some-football type contest.  Brody Curtiss started for your local nine, and as has been the case all season, the right-hander was brilliant.

Curtiss traded zeros with Indians starter Dallas McBroom through four innings before a run in the fifth resulted in a 1-0 lead for Waterville. An RBI single by Pat Schultz in the sixth tied things back up at 1-1. In the bottom of the sixth, a pair of Tiger errors led to as many runs and a 3-1 Waterville advantage.

El Tigre wasn’t done, however, as Tyler O’Brien and Curtiss belted back-to-back solo home runs to tie the score, 3-3, in the seventh. Curtiss continued to shine on the mound, meanwhile, as he took the Tigers to the tenth inning before Belle Plaine loaded the bases with no outs.  After two strikeouts, “Beanball” O’Brien was hit by a pitch to give the Tigers a 4-3 lead with three outs to go.

Curtiss began the inning with an out that was followed by two bloop singles. He finally gave way to Derek Dahlke who surrendered a two-run single as Waterville walked off in dramatic fashion. The tough-luck loss was Curtiss’s first of the season.

Belle Plaine had eight hits, with O’Brien and Aiden Ladd both collecting a pair. O’Brien reached base in all six of his plate appearances, adding a walk and getting plunked by a pitch three times – giving him an incredible 16 hit-by-pitches in essentially half a season.