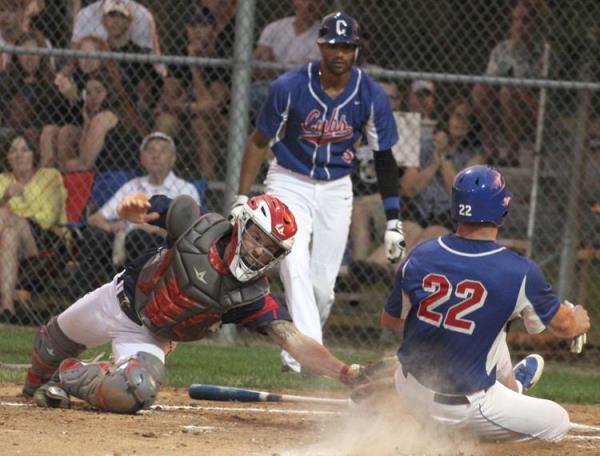 Ground out, pop out, strikeout.

Strikeout, pop out, fly out.

Are you getting how dominant Chaska Cubs pitcher Drake Kilber was over the final six innings in a 5-0 win at Victoria in Region 3B play Aug. 11?

Coming off a one-hitter over Prior Lake, clinching a spot in the state tournament, Kilber dazzled against a Vics squad that shutout the Cubs twice in regular season play in July.

Just one runner reached on an infield error over the final six innings after Kilber worked out of a bases-loaded, one-out jam in the third inning.

"That's why he has the nickname Bulldog. The way he goes about it, it's so fun to watch. He's so effective with mixing his pitches. He controls the outer half; he's not afraid to come in the inner half. In this league, when you can do those two things you're going to be effective," Chaska's Steve Edlefsen said.

Edlefsen knows something about pitching. He was a 16th round draft pick by the San Francisco Giants in the 2007 amateur draft, pitching two seasons in Major League Baseball before retirement in 2014.

The Cubs third baseman this season, the sense Edlefsen felt from the Victoria dugout in facing Kilber was one of frustration. Join the club. Kilber's ever-improving pitching seems to get better each summer.

"(Drake's) not afraid to throw any pitch in any count. As a batter, you're never really comfortable. He'll throw you a 2-0 change-up. That's why his pitch counts are always so low. He pitches into the ninth inning most games, makes guys get themselves out," Edlefsen said.

Kilber finished with 101 pitches in the complete game, striking out three batters.

Scoreless through four innings, a pair of two-out walks to JT Canakes and Mac Born started a three-run rally. Mike Edlefsen's sharp single to left field plated Canakes just ahead of the team for the first run.

Kris Goodman's line drive up the middle caught the tip of the glove of a diving second baseman Hunter Even of Victoria as both runners easily scored for the 3-0 lead.

Born added a run-scoring single in the seventh inning, chasing Victoria starter Connor Oestreich before Born later scored in the ninth on back-to-back hits from Brad Worm and Tyler Polster with two outs.

Meanwhile, Kilber was on cruise control, surrendering just one base runner the final six innings, a total of just four hits for the game, and five over 18 post-season innings.

"We had a stretch there where we weren't hitting," said Edlefsen of two previous losses to Victoria. "A couple of games we were missing some guys. A combination of both of those. In a short season guys didn't have the reps and now I think we're turning it on at the right time."

Edlefsen, who attended Bloomington Jefferson High School, came to the Cubs along with his younger brother, Mike, in 2019. They both immediately fit in. As have many of the new additions this summer for Cubs, including Born and Grif Wurtz, recent graduates from Chaska High School, and catcher Riley Swenson, a current Gopher.

"The younger guys have adapted well. They mix really well with what we've been able to do the past couple of years. It's a good group of guys. Different guys are ready to do whatever we need them to do for us to be successful," Edlefsen said. "I've known a few of these guys before we started playing here. I help out with Chase (Hentges) over at HTP Academy. Baseball is a small world. You know each other from high school and those friendships just come right back when you're on the diamond."

With the loss, Victoria is the No. 3 seed in Region 3B ahead of Prior Lake.

Chaska will need to beat top-seeded Chanhassen twice on back-to-back nights, beginning at 7:30 p.m. on Thursday, Aug. 13, to improve on the second seed from the region into the state tournament.