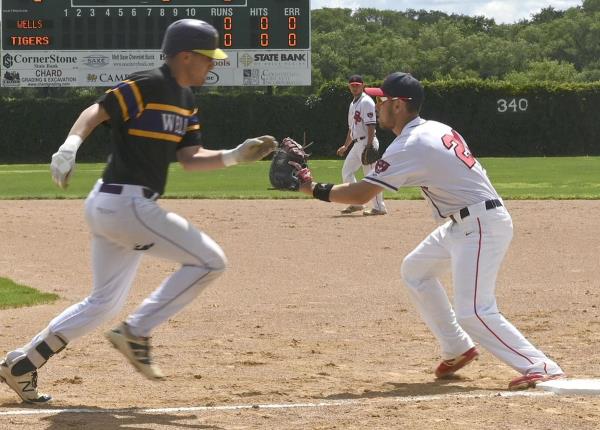 The Belle Plaine Tigers came out of the gate strong in Sunday’s playoff opener, using a seven-run first inning to overpower Wells in a shortened affair, 14-4.

According to seeding, the only upset in last weekend’s Region 6C Tournament was No. 7 seed Morristown’s 8-3 win over Minnesota Lake, the No. 2 seed from the 13-60 League. There was one near-upset, as No. 6 seed Arlington took a 3-1 lead to the 9th before falling, 4-3, in No. 3 Waterville’s last at-bat.

On Saturday, Aug. 8, at 6 p.m., the RVL’s No. 3-seeded Tigers will host the upset-minded Morries – the team that ended its 2019 campaign with a 2-1 setback at Jordan in last year’s Region 6C Tourney. Last year’s Tigers were denied their 20th win of the season, finishing 19-10; this year’s half-season rendition sits in much the same position, seeking their 10th win (9-5).

Win or lose, the Tiger Train will also play on Sunday, Aug. 9. A win over Morristown would bring on the winner of Jordan – St. Clair, while a loss to the Morries would result in facing the winner of Blue Earth – Henderson and a longer row to hoe. With so much yet to be determined, including game times and locations, stay tuned to bptigertown.com or our social media channels on Twitter and Facebook (bptigertown).

Brody Curtiss, the bonafide ace of the Tiger staff this season, took the ball from manager Matt Ruehling and posted a quiet first inning. The Tiger bats were anything but in the bottom of the inning, batting around before an out was recorded while hanging a seven-spot on the awestruck visitors. The highlight of the first frame was a 3-run homer from Aiden Ladd, who as the No. 3 hitter also made the last out of the first inning.

A two-out triple scored a pair of runs to put Wells on the board in the third, but the home-half of the stanza witnessed another 3-run tater from Aiden Ladd – this one right inside the left-field foul pole – his second of the day and season. The latter circuit clout extended the Tiger lead to 11-2, allowing the locals to cruise the rest of the way.

Curtiss, who worked five innings and allowed a pair of unearned runs, improved to 3-0 this season with a sparkling 0.68 ERA.  He fanned four Wildcats without a walk, while Jared Miller added two more punchouts over his two frames.

Ladd and Jamie O’Brien led the Tiger parade with two hits apiece; seven others contributed one. Aside from Ladd’s six RBI, Curtiss drove in three while Pat Schultz had a pair. The locals were plunked by a pitch eight times, with Tyler O’Brien enduring three beanings. Derek Dahlke and Jonny Vinkemeier were hit twice.