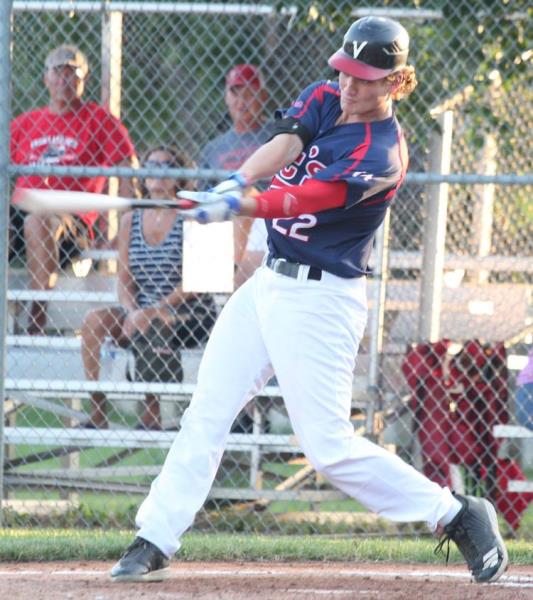 Trey Cavello has spent some extra time on the golf course this summer. And while the former Holy Family Catholic High School baseball player hasn't seen much improvement in his golf swing, his approach at the plate with the Victoria Vics is producing large results.

Victoria is 8-1 in the River Valley League with one game remaining on Thursday at home versus unbeaten Chanhassen at 7:30 p.m.

"Baseball, it couldn't going any better. You know, stats are stats. I don't really look much at that. Winning and having fun are more important," Cavello said. "The group we're playing with, it is something special. The chemistry we have is unmatched. If you're not having fun, what's the point?"

Cavello remembers a playoff game with Shakopee in 2018. The game was tied at seven through nine innings.

Cole Sweeney, the oldest player on the Vics this summer, the age of 26, called in the youthful Victoria team in the dugout.

"He said something like 'You're young, you're new to this, but we're going to win this. And we did. He said, 'Give us a couple years and we're going to be really good," Cavello said of Sweeney.

Cavello, then a first-year Vic, doubled home two runs as Victoria moved on to state in a 10-7 win. Last year Victoria won a state game behind a stellar pitching performance from Riley Sweeney.

This year, Victoria may have one of the best rosters in all of Class B.

"We all have matured incredibly. Our depth is absurd," Costello said.

Then there's the group from Eden Prairie including Cavello and lifelong friend Matt Dolan.

"I called up Matt, told him I was going to play in Victoria and that he should join. He plays at St. Thomas and I play at St. John's, so it's nice to play against each other after playing against each other in college," Cavello said.

Dolan won a state title at Eden Prairie High School. He's filled out the third-base position for the Vics and is hitting .357 in the middle of the batting order.

"He's my best friend on the team. I've known him since I was like 4 or 5, so we're having a blast together," Cavello said.

What makes playing for Victoria so great is the teammates in teh dugout. Cavello said "veterans" such as Cole Sweeney and Schmidt bring in a level of experience that guys look up to.

"They are asking the question, how we can approach things differently. They both understand the game so well. And our pitching staff. Wow. Guys like Bonk, (Ryan) Och, and (Corey) Binger. With guys like that, it doesn't take too much to win the game. I'm glad they wear the Vics uniform," Cavello said.

Cavello, who has pitched, played outfield and has been a designated hitter this summer, called catcher Jeffrey Kressler "the glue" of the staff. "When he calls a pitch, I don't shake him off," Cavello said.

Cavello was lifted in a 1-0 game in the rematch in favor of Davidson. The pinch hitter came through with two singles and run batted in.

"Whether it was me, or Jared, at the end of the day we took care of business and got the win. We've got confidence in our entire team right now. We know whoever we put out there, they're going to produce results," Cavello said.

LAST WEEK OF THE REGULAR SEASON

That just means the final week is all that more exciting.

The River Valley League East playoffs begin on Sunday, Aug. 2 at the top four seeds. Second and third rounds are Aug. 4 and 7 with the winners bracket, and Aug. 5 and 7 in the losers bracket.

State qualifier games are Aug. 9, 11 and 13 with a if necessary second championship game on Aug. 14.

Chaska, handed a 7-0 loss at Victoria on July 23, came back one night later to beat Shakopee 9-2 on the road behind an eight-inning gem from Drake Kilber. The southpaw allowed just one run on six hits with three strikeouts.

A Kris Goodman walk, Justin Johnson RBI-double and Tyler Polster RBI-single set the tone in the first three at-bats of the game.

Mac Born's sacrifice fly in the first and RBI-single in the third inning was joined by a bases-loaded walk and Grif Wurtz's run-scoring fielder's choice as Chaska jumped out to a 6-0 lead.

Chaska closes out the regular season July 28 versus Eagan, July 29 at Chanhassen, and July 30 at home versus Minnetonka with a start time of 7:15 p.m.