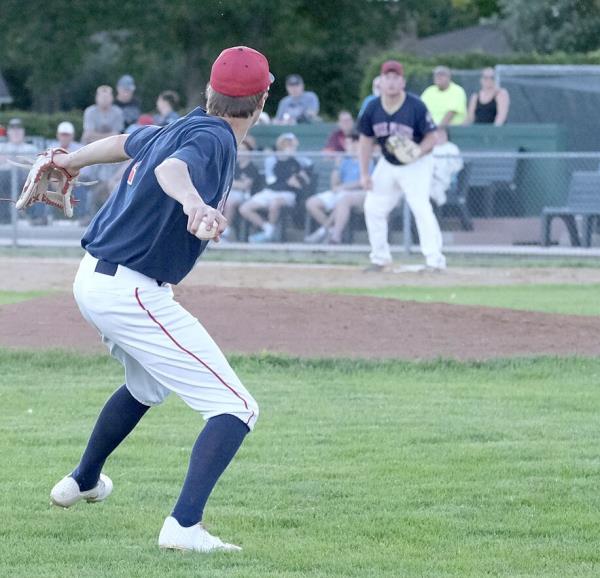 There are two games scheduled at Tiger Park on Wednesday, July 22. The Gray Tigers will face the Jordan Millers at 5 p.m., while the town team will take on Henderson at 7:30 p.m.

One admission fee covers both games! There will be no admission charge for former Tigers, as part of the Tiger Alumni Night festivities – the highlight being the unveiling of Dave “Greek” Wagner’s new Hall of Fame plaque on the west side of the grandstand.

Little Leaguers are invited to wear their uniform tops and chase foul balls as part of the annual Little League Night promotion, and they may also claim a free hot dog at the concession stand.

The game on Saturday, July 25, at Henderson has been switched to a 6 p.m. contest in Belle Plaine; Henderson will serve as the home team.

Sunday, July 26, at 6 p.m. will be Fan Appreciation Night against the defending Class C champion Jordan Brewers – already the last game of the regular season. There will be giveaways galore!

The Tigers played at Gaylord last night; visit bptigertown.com or BPTigertown on Facebook or Twitter for the result and details.

Otherwise, this past week was a hairy one for our striped warriors, narrowly avoiding a three-game losing skid thanks to a late comeback victory, 11-10, in extra innings against Arlington on Sunday. Previous to that, the Tigers scored just two runs in losses to St. Peter and Le Sueur. El Tigre is 5-4 (4-4 RVL) on the season.

The Tigers jumped out to an early lead against the Saints in the first inning when returning Tiger Aiden Ladd laced an RBI double and later scored on a sacrifice fly from his former college teammate, Derek Dahlke. That’s where the offensive highlights for the hometown nine end, however, as the Saints scored the last six runs of the game. The Tigers stranded nine base runners.

Jared Miller started on the mound and scattered eight hits across five innings. The Saints scored twice in the fifth frame and added three insurance runs in the eighth to salt away the victory. Ladd, Brody Curtiss and Jake Mercado all tallied two hits for the Tiger Train.

Tyler O’Brien, the everyday center fielder for the Tigers, got the starting nod on the hill against Le Sueur. He was opposed by cagey veteran Brandon Culbert, who prefers to finish what he starts. O’Brien gave the boys a chance by allowing three runs (two earned) in five-plus innings, but Culbert would not be outdone and did indeed go the distance. He punched out eight batters, although the Tigers took out a bit of the sting by breaking up the shutout in the ninth inning.

Terrio, with two hits, continued to swing a hot bat to lead an otherwise-toothless Tiger attack. Mercado (a triple), Jonny Vinkemeier (a double), Curtiss, and Andrew Fisel had the other knocks for Belle Plaine.

The Arlington A’s came to town on what should have been the final day of Bar-B-Q Days. In honor of the missing midway, both teams threw the ball around like they were playing “Knock Down the Clown.”

Sparing you the heretofore gory details, the Tigers started showing signs of life in the eighth inning but left the bases jammed to remain in a 10-6 deficit. In the ninth, the locals made two quick outs before Jake Mercado’s two-run single trimmed it to 10-8. Pat Schultz drove in a run, making it 10-9, before Josh Terrio knotted the score with a solid base hit. With the bases loaded, rookie Jamie O’Brien hit a sharp ground ball to the shortstop that just nipped the Tiger base runner at second base, and it was on to extra innings.

Tiger pitcher Colton Kerkow said, “Two can play that game,” loading the bases with A’s in the top of the 10th before wriggling out of the frame without allowing a run. Not much later, Tyler O’Brien – who collected four hits – scored on a sacrifice fly from Mercado, completing the improbable comeback win.

Chase Emmers started on the mound for Belle Plaine and didn’t have his usual stuff, going 2.2 innings while getting torched for eight runs (five earned). Pat Schultz worked the next 3.1 frames, giving up only an unearned run. Jonny Vinkemeier chucked three stanzas (one unearned run) before yielding to Kerkow.