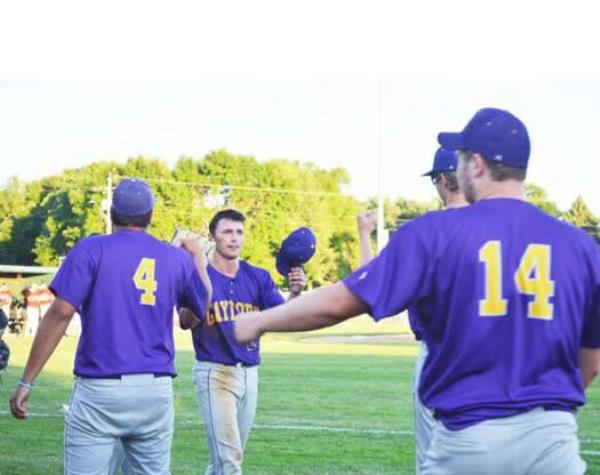 GAYLORD, MINN. – The mantra for growing feed corn was “knee high by the Fourth’’ when we moved from Murray County in the early 1960s. It’s now called field corn, apparently, and the seeds planted by Minnesota farmers for several decades have been done so with far greater ambitions than 2 feet high on the Fourth of July.

The early July corn was impressive on Sunday while I was driving 20 miles on Hwy. 5 — from the Hwy. 212 turnoff — to Gaylord, home of the town ball Islanders.

“Corn looks great; it’s up to your forehead,’’ I said to a couple of gents in seed-corn hats later at Bill Walsh Field.

A worried look came over both and one said: “It’s good here, but fields by Stewart and Buffalo Lake got wiped out by hail yesterday. I drove through there … never seen fields destroyed like that, corn and beans, from hail.’’

The other man said: “Hail the size of tennis balls, they’re saying.’’

Brian Rodning has 1,000 acres near Gaylord, most devoted to corn and beans. His son McKoy helps with the farming. So does son Brody, when he’s back home, which was much earlier than had been anticipated in mid-February, when the 24-year-old lefthander embarked on the 1,600-mile drive to Dunedin, Fla., to join the Toronto Blue Jays’ minor league camp.

“We were two weeks into camp, getting ready to start playing exhibitions,’’ Rodning said. “Then, we were told a Boston guy had tested positive, and we weren’t going to play, and then came the shutdown.’’

Soon, the Blue Jays said this would be long-term, and Brody headed back to Gaylord in mid-March. He is now the only player still employed by a major league organization with a waiver to be competing in Minnesota amateur baseball.

Mike Nagel, the secretary-treasurer of the Minnesota Baseball Association board, said: “The virus canceling minor league ball made this a unique summer. Because of that, the option was there to play with the proper paperwork. Brody is our one player with a minor league contract who gave us that paperwork.’’

Rodning was scheduled to work the final two innings Sunday vs. the St. Peter Saints. He had made four appearances (three starts), throwing 17 innings with 41 strikeouts, two hits and no runs allowed.

Brody entered Sunday with a 7-4 lead and found a feisty collection of Saints. Gaylord boxed the ball in the field, there were a couple of hits, and it was 7-6 with two runners on before the final out was recorded.

Rodning spent his life playing baseball on this emerald turf. He was the ace pitcher and outstanding hitter for Sibley East (a merger with Arlington and Green Isle), the quarterback on a team that lost to Caledonia in the state quarterfinals in 2012, and became a career 1,000-point scorer in basketball as a senior in 2013-14.

“I was a skinny runt, about 160 pounds,’’ Rodning said. “Best thing that happened to me in three years at [Minnesota State] Mankato was the strength training. I was 190 by my junior year, throwing harder, and that got me drafted.’’

Rodning was selected in the 13th round by the Blue Jays in 2017. He did well with the rookie league team in Vancouver, B.C., where Kacy Clemens was a teammate, and his father, Roger, was a spectator at a couple of Brody’s bullpen sessions.

“Roger gave him his cell number and said, ‘Don’t be afraid to call; [Clayton] Kershaw and Chris Sale called me yesterday,’ ” Brian Rodning said. “Brody hasn’t taken Roger up on it, yet.’’

Rodning had an outstanding second pro season in the low-A Midwest League at Lansing, Mich., in 2018. Last year became a serious detour when he pulled a “lat’’ in his left side and pitched only 12 innings.

He was targeted to start this season at high-A Dunedin. Assortment: fastball in at 91-92 mph, outstanding slider and a changeup that he “loves.’’

Still, with 30-some players getting released by Toronto with the minors canceled, and last season’s injury — could the Blue Jays’ ongoing interest be a surprise?

“I don’t think so,’’ Rodning said. “I’m a lefty reliever with a bit of a funky delivery. Teams like that.’’

So does Beckett, his 3-year-old niece. Older brother McKoy is Gaylord’s catcher and his wife, Steph, was there with Beckett and baby Kamdyn.

When Brody came to the plate, Beckett shouted, “Let’s go, Bo Bo,’’ and when a foul out of play followed, the 3-year-old was off like a shot in the hope of collecting the 50-cent ransom for retrieving baseballs.

Mark it down: Beckett Rodning, track star, Class of 2035, Sibley East High. And Uncle Bo Bo will be proud.